An operating deflection shape (ODS) is defined as the deflection pattern or shape of a mechanical structure (machine or machine components) at a particular frequency (typically at operating speed). This shape is determined by measuring dynamic deflections of a machine in response to operating forces at two or more locations on machine, while the machine is in operation. This methodology is used to show the relative motion of machine components due to existing forces. As well, the ODS gives an intuitive representation of the synchronous (1X) motion (and other frequencies) of the machine components and supports etc. When the frequency of the existing forces coincides with natural frequencies of the machine, the mechanical system will resonate; like a bell does when struck by a hammer. When this occurs, the natural frequency mode shape (modal analysis) and ODS at that particular frequency will look very similar to one another (elevated deflections due to a natural frequency or resonance phenomenon).

To perform ODS measurements, a reference vibration sensor, like an accelerometer, is mounted on the machine at a location that exhibits significant vibration, usually a bearing housing, and in an orientation where the response of the housing to existing forces can be readily measured. Typically, the location exhibiting the highest vibration level is selected as the reference sensor location.

Additional vibration sensors are used to capture vibration signatures at several location on the machine. The first vibration sensor is used as an amplitude and phase reference for other measured response locations. This reference sensor remains fixed at its location throughout the ODS measurements.

After ODS measurements are acquired, a computer analysis software package is used to create a computer model of the machine. This model is then used to visualize the scaled ODS deflections, identify key deflections patterns and derived corrective actions.

Modal analysis is the process whereby natural frequencies (or modes) of a machine, a component of a machine, or other structures are identified and characterized. Natural frequencies are inherent in almost all mechanical structures.  When the frequency of the existing forces or vibration coincides with natural frequencies of the machine or structure, the machine will resonate; like a bell does when struck by a hammer. This behavior is called a resonance or resonant condition. When this occurs, inherent vibration amplitudes of the machine, such as unbalance in rotating components, are amplified. In rotating equipment, these unbalance induced resonances are commonly called “critical speeds”.

This modal analysis process involves inducing a known dynamic force into the machine or machine component and simultaneously measuring the vibration response to the dynamic force. Typically, the force is induced (excited) by using an electromotive shaker or an impact hammer.

To measure the amplitude of the induced force, both excitation techniques use instrumented load cells, so the force signature (amplitude and phase) can be captured. The response of the machine or machine components to the known force is measured using a vibration sensor, typically an accelerometer. This dynamic response is typically measured at several locations on the machine; however alternatively the response can be measured at one location and known force induced at multiple locations. Modal data is collected while the machine is not running; so normal machine vibration energy is not be present and only the response of the machine to the induced force is measured. A multi-channel dynamic data acquisition system is used to capture the force signature from the hammer or shaker and the response signatures from the accelerometers.

The measured/captured force and response signatures are used by the acquisition system to compute frequency response function (FRF) spectra (sometimes referred to as transfer function or TF spectra) for each measured location/direction of the machine. FRF spectra describe the complex relationship between the induced force and the machines’ response. This relationship is expressed as amplitude and phase information as a function of frequency. These FRF spectra were then imported into a modal analysis computer software package where natural frequencies and modal characteristics (like percentage critical damping, amplification factors…) were computed and mode “shapes” generated. 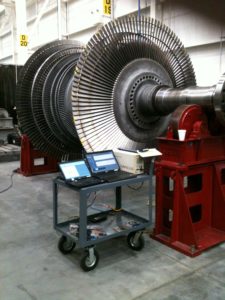 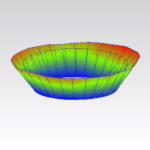